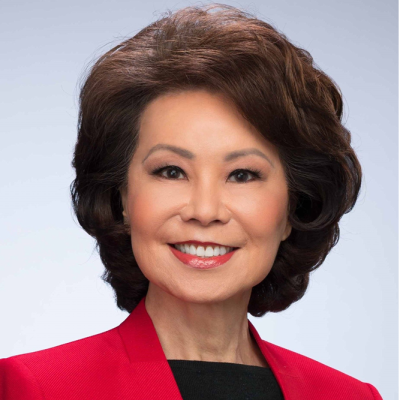 Elaine L. Chao is a distinguished fellow at Hudson Institute. She leads a policy program on jobs, transportation, and economic leadership.

Secretary Chao is the first Asian-American woman to be appointed to the President’s cabinet in American history. She has served in two cabinet positions: first as U. S. Secretary of Labor then as U.S. Secretary of Transportation.

Secretary Chao’s distinguished career has spanned the public, private, and nonprofit sectors. An immigrant who arrived in America at the age of eight speaking no English, she received her citizenship at the age of 19.

During her tenure as Secretary of Transportation, the Department modernized America’s infrastructure, promoted American innovation including autonomous vehicles, unmanned aerial systems, commercial space and supersonic flights. During the COVID-19 health crisis, Secretary Chao’s decisive actions kept America’s transportation systems open, safe and moving. As U.S. Secretary of Labor, she focused on increasing the competitiveness of America’s workforce in a global economy and set new records in workplace safety and health.

Secretary Chao was also president and chief executive officer of United Way of America, where she restored public trust and confidence after it had been tarnished by financial mismanagement. She was also director of the Peace Corps, where she established the first programs in the Baltic nations and the newly independent states of the former Soviet Union.

Secretary Chao was a distinguished fellow at Hudson Institute before becoming U.S. Secretary of Transportation.

Secretary Chao earned her MBA from the Harvard Business School. Recognized for her extensive record of accomplishments and public service, she is the recipient of 37 honorary doctorate degrees.