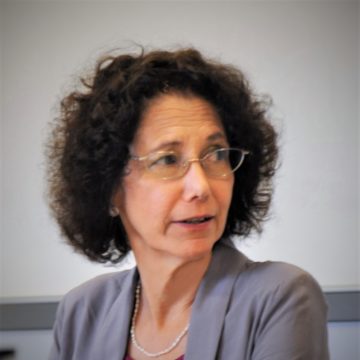 Janet Dougherty is a member of the senior faculty of St. John’s College, where she has taught since 1982. She has taught the entire undergraduate curriculum including classes on Euclid and Einstein, and seminars on Plato, Shakespeare and the Bible.

She has lectured publicly on Sophocles, Plato, Aristotle, Machiavelli, Descartes, Montesquieu, Tocqueville, Hegel and Shakespeare’s Tempest, and has delivered papers at the American Philosophy Association, and participated in panels hosted by the Liberty Fund and by Hudson Institute. Her most recent lecture, on Xenophon’s Symposium, is entitled “Socrates at Play: The Beautification of the Good."

Ms. Dougherty has published both in the St. John’s Review and The Review of Politics, and is also a contributor to The Arts of Rule: Essays in Honor of Harvey C. Mansfield. She spent most of her recent sabbatical reading Hegel’s Science of Logic and reading and writing on Xenophon’s Socratic works. She received a B.A at Yale in Philosophy and a Ph.D. in Government at Harvard.