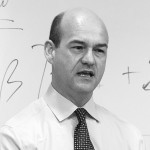 Robert C. Bartlett is a graduate of the University of Toronto and holds an MA in Classics and a Ph.D. in Political Science from Boston College. His principal area of research is classical political philosophy, with particular attention to the thinkers of ancient Hellas, including Thucydides, Plato, Xenophon, and Aristotle.

Prof. Bartlett has published articles in the American Political Science Review, American Journal of Politics, Journal of Politics, Review of Politics, and other leading scholarly journals. He is the author or editor of seven books, including The Idea of Enlightenment, Plato’s Protagoras and Meno, and Xenophon’s The Shorter Socratic Writings. He is also the co-translator of a new edition of Aristotle’s Nicomachean Ethics (University of Chicago Press, 2011) and the author of a forthcoming study of Plato’s Protagoras and Theaetetus.

Before coming to Boston College, Robert Bartlett served as the Arthur M. Blank/National Endowment for the Humanities Distinguished Teaching Professor at Emory University.